The big picture? carbon steel and cast iron pans are much more similar than they are different. 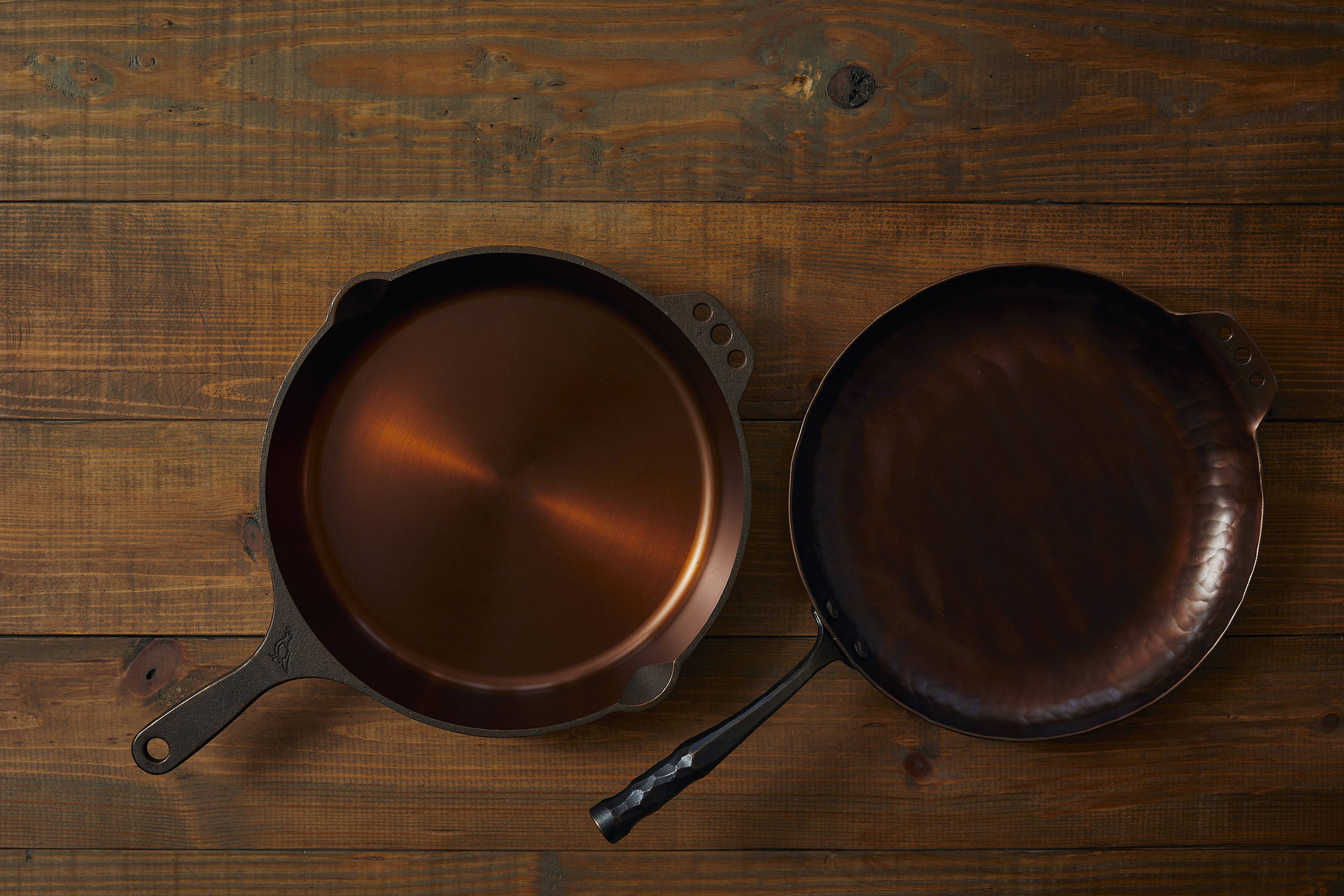 It should come as no surprise that we have our fair share of history buffs around the Smithey shop. After all, Isaac founded the company in large part because he was inspired by the beauty and craftsmanship of early American cast iron and wanted to resurrect that legacy. And while we’re admittedly biased, the history of cast iron in America is fascinating. If you have the time, we highly recommend a stroll through Soho with your eyes upward, taking in the architectural designs of the cast iron district. Or jump down a rabbit hole with late 18th century Griswold skillets and learn how you can date various skillets by the changing forms of the logos. Or maybe just re-read The Grapes of Wrath and take note of Ma Joad’s most valuable possession and its importance in her everyday life, from cooking multiple meals a day to chasing away the disrespectful.

THE HISTORY OF CARBON STEEL

Carbon steel pans generally began to pop up in commercial kitchens in the second half of the 20th century. While manufacturers during this era turned their attention to the magic of industrial chemical coatings like Teflon for the home cook and lightweight aluminum for cheaper construction, carbon steel was a highly durable material that could get blasted by heat on a commercial stove for hours a day and come away better for the use. But no one would describe carbon steel as sexy. Of course, we would argue that the idea of a lighter weight pan that lasts forever, thrives on high heat and is naturally non-stick with no chemical coatings is pretty damn compelling – it just took Americans a few decades or so to come around to it.

Back to the comparison - carbon steel and cast iron are similar materials that both contain a high percentage of iron. The primary difference between the materials stems from how the metals are made - carbon steel is produced by a method that creates a more uniform grain structure and results in a stronger and more pliable alloy, while cast iron ironically contains a higher percentage of carbon that results in a metal that while excellent at retaining heat tends to be poured into thicker applications. In practical terms carbon steel pans tend to be lighter than equivalent cast iron sizes, with very similar cooking properties. The thinner carbon steel will generally heat faster than a cast iron pan, while the thicker cast iron pan once up to temperature will generally maintain a consistent heat for longer. 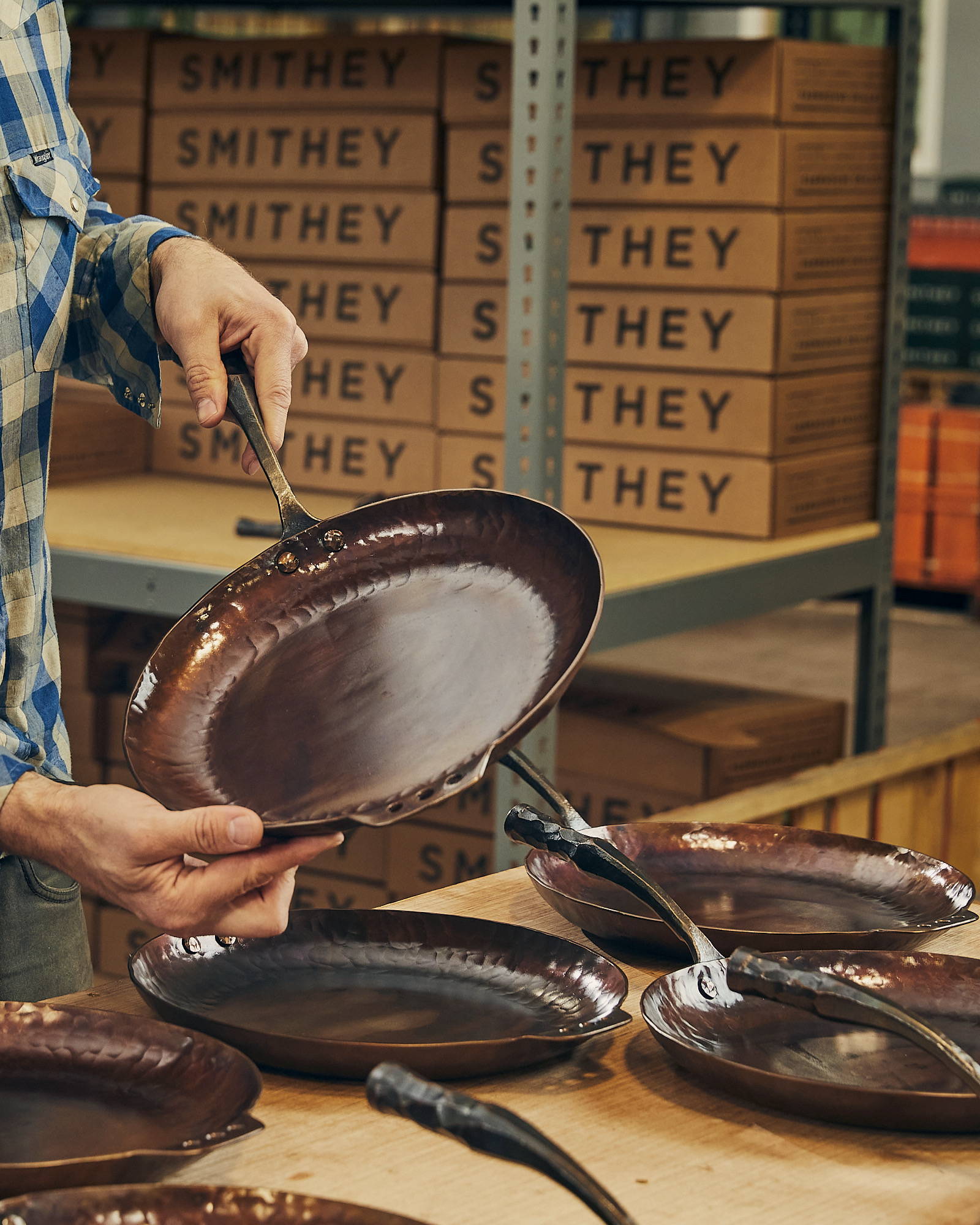 how do you care for carbon steel

Like cast iron, carbon steel pans are essentially raw metal pans that benefit from seasoning. Without going too deep (that’s for another post), seasoning is a layer of oil that has bonded with the metal at high heat and that protects the base layer from rust (and conveniently creates a naturally non-stick cooking surface). All Smithey carbon steel pans come pre-seasoned and ready to use – same as our cast iron. After cooking, the cleaning process is the same as well – a light scrub with a little water and then a thorough drying is generally all you need to do. Never soak cast iron or carbon steel overnight and avoid the dishwasher. And both pans will benefit from a light wipe of oil from time to time after cleaning. Of course, the best way to maintain either a cast iron or carbon steel pan is to use it often!

So the big picture? Carbon steel and cast iron pans are much more similar than they are different. Both will stand up to high heat, deliver a great sear, and move with ease from stovetop to oven. Both are seasoned metals that will change in look over time with use. And both are designed to last forever. Of course, not all cast iron and carbon steel are created equal. At Smithey, we believe we’ve taken the crafting of both carbon steel and cast iron cookware to new heights. Take a look here to see how we do it:

Thanks for contacting us. We'll get back to you as soon as possible.

You have no items in your cart.